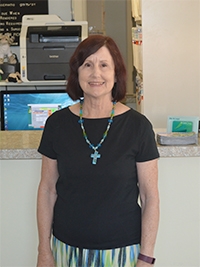 Before entering the veterinary field, Anita owned a daycare. When she sold her facility, she began looking for a similar management job. As soon as Anita came across a newspaper listing for an open position at a veterinary hospital, she knew she’d found the perfect fit! She’s been serving the area’s pets and animal parents here at Forest Lane Animal Clinic for 25 years.
Anita is originally from Michigan. She began here at the clinic in early 1991 and has been serving as the Office Manager ever since. When she’s not busy scheduling appointments and checking clients in and out, she loves to jump in and help the doctors and technicians with examinations, surgeries, and bloodwork. Anita’s favorite parts of her job are meeting new people and reconnecting with long-time clientele.Anita and her husband have three grown daughters and are proud grandparents to three boys and two girls. They share their home with their grandsons and a variety of pets: they have a neurotic miniature Pinscher named Princess; two cats named Bobbi and Milo; an aquarium full of fish; hermit crabs from Galveston; and several parakeets.When she isn’t tending to pets’ needs here at the hospital or spending time with her own critters, Anita enjoys reading, going to the movies, and taking her grandchildren on fun day trips. She also likes to remain active in her church, and was recently elected Vice President of the Women’s Guild!